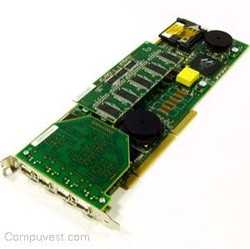 Last time I briefly covered the Hursley Storage team’s work on the 7133 – Serial Storage Architecture products. Thanks for all the emails about this, and I’m glad people still remember it – fondly?! Those screwdrivers – and Martin, i think most of the screwdrivers were multi-coloured, its the single coloured ones that are rare 🙂

In the mid 90’s our counterparts in Tucson were working on what was then known as CPSS (Common Parts Storage Sub-system) which became also know as “Shark” and eventually the ESS product range. The idea here was the same as what I always bang on about SVC, using common parts – in this case then the RS/6000 servers, to build a storage subsystem.

Since SSa was taking off majorly, the second generation SSa-40 was given some additional requirements, so that it could become the disk interface in the ESS products. Its worth pointing out that the Hursley team not only wrote the firmware, which by now was doing multi-way RAID, looking into Log-structured Array and sophisticated hot-spare pooling technologies, but also designed the hardware itself. The team designed the SSa protocol silicon, the ASIC’s on the cards (running PCI, XOR engines, DMA engines, emdedded processor etc) and of course the card layout itself.

Thanks Bob for the following which he pinged me after my first post :

Mike Palmer was the serialiser/deserialiser designer, and I believe it was the first to be done entirely digitally, the clever bit is dealing with the fact that the clocks at both ends, although crystal locked, drift slightly w.r.t. each other. This means that every now and then you have to slip a bit or gain a bit, but without corrupting the data.

Around this time I was “playing” with web user interfaces. I was part of the host-software development team, and worked on a sub-projected called RSM (Remote Systems Management) based on some Tivoli Netfinity system management software that allowed us to render basic HTML pages based around CGI scripting to show logical and physical views of the SSa loops, and of course configure the storage itself.

One of the other things that developed during this time period was the SSa-40 enclosure, which included some basic SES (SCSI-Enclosure-Services) pages, allowing temperature, fans, power status, and the all important seven-segment display manipulation.

As I mentioned in part1, the industry move towards Fibre-Channel, and in particular Fibre-Channel Aribitrated Loop drive interfaces signaled the death of SSa, but we had a vast knowledge of RAID, ASIC development and general “disk drive” and “SCSI” behavior.

The RS/6000 products became pSeries and to remain competitive needed simple on-board SCSI attachment and so moved towards more basic 1-way RAID functionality, meanwhile ESS needed a follow-on adapter, which this time would be based on FC-AL. The team had been working on a new PCI-X ASIC, and the adapter cards themselves moved to use industry standard FC-AL connectivity and more powerful embedded Power-PC hardware. After a few more years of development, what we know as the DA (Disk Adapter) in the various DS8x00 products was released. I believe the ASIC is also used in the HA (Host Adapter) and provides some of the needed mainframe offload.

During the years between ESS and DS8000 it was frustrating to be at the coal face, trely dealing with the short-comings of FC-AL. For example, a drive throws a bit of a wobbly, and starts consuming packets, eventually the loop comes down, but how do you bring it back. Which drive was it… how do you bypass the right drive to mend the link… with SSa we took things like this for granted, it really was a step backwards from what we knew, and took a lot of man hours. Not only from the perspective of designing and architect’ing the solution, but developing and testing all these new areas – particularly what IBM calls RAS (Reliability Availability Serviceability)

Around the turn of the millennium , a couple of members of the team went out on assignment to work with the Almaden Storage Research team, and what they brought back was – at the time (and probably still now) – truly unique…