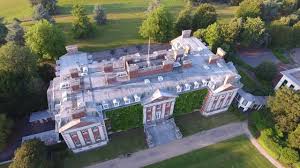 Before I forget I wanted to wish SVC all the best in its 6th year in production. I guess it seems a lot longer, but then I have been (like a lot of the team) working on it for over 8 years now.

IBM just celebrated its 50th year at the Hursley site. For those of you that don’t know Hursley, its probably one of the nicest places you could ask to work. The main ‘house’ in its current form was rebuilt in the Victorian era building on Georgian brick building (Sir Thomas Heathcote) and before that his father Sir William built a red brick, Queen Anne style mansion on the site of a Tudor house in Hursley Park, a former hunting lodge, and started a the present day Hursley dynasty.

Last weekend, the weather just held for a great afternoon/evening of entertainment. Our kids loved it, bouncy castles, tea cup rides and all. However my daughter was petrified of the Spitfire aerobatics, worrying that the plane was going to fall out the sky. Even now, that merlin engine sounds great and the maneuverability of the aircraft is stunning. Why a Spitfire – well as I may have mentioned in the past, when the Vicars factory was bombed during WWII the British Ministry of Defense took over ‘the house’ as their development base. When IBM took over in 1968 there was still hangers and the like on site. The scary thing is I remember all too well the 40th celebrations just after we had moved to Hursley from our exile in Havant (now Xyratex) on the same site IBM used to manufacture HDD’s in the 80’s and 90’s.

Anyway, SVC has been through five hardware ramps in its five years in the field, more are on their way, and this just goes to prove the beauty of the platform agnostic nature of the code base we have developed, not to mention the benefits of piggy-backing on the bandwidth and processing enhancements of the Intel based Xeon platforms. (I’d love to tell you how many different platforms we’ve ported the code to, but can’t – needless to say none of them perform as well as the Xeon platform)

The multi-cored approaches, keeping up with next gen FC, ever increasing PCI bandwidths, FSB advances (replacements), memory speed and density improvements all bode well for the future of our flexible code stack. Here’s to the next 5 years, and providing even faster, more advanced functionality to help our customers achieve their day to day business goals, and help to remove storage function inadequacies from the equation.